ATG is Anti-Thymocyte Globulin, a biological agent used to lower immune reactions.
GCSF is Granulocyte Colony-Stimulating Factor, a biological agent which causes bone marrow to generate more stem cells and more immune cells, and put them into the blood stream.  It is sometimes called G-CSF, and the exact product being used is Neulasta.

So the two of them together could make an effective combination therapy against type-1 diabetes. ATG would lower the autoimmune attack, and GCSF would help the body regrow beta cells.  At least, that is the hope. I wrote a more detailed blog entry on this combination four years ago, which you can read here:
http://cureresearch4type1diabetes.blogspot.com/2010/08/atg-gcsf-starts-phase-i-clinical-trial.html

This is a three armed study.  Each group will have at least 28 people.  The first will get ATG.  The second will get ATG and GCSF.  The third will get a placebo.  The ATG will be given twice, one day apart.  The GCSF will be given six times, two weeks apart. They started recruiting in December 2014, and hope to finish collecting their data in October 2016.  The primary outcome (the most important result they will measure) is C-peptide generation after a meal as measured a year after treatment.  There are no secondary outcomes listed, however I've been told they will track A1c, insulin usage, low BG, adverse effects, and infection rates as secondary outcomes.

They are recruiting in at least six different locations, all over the United States.  Although it's not listed on the clinical trial site, Stanford is recruiting for this trial, and they are planning on adding UCSF soon as well.  The list (with contact information) is in the Clinical Trial Record below. Patients must be between 12 and 46, and have been diagnosed within a 100 days,so this is a honeymoon trial.

Funding for this trial comes from several US government agencies, JDRF, ADA, Helmsley, and two commercial companies: Sanofi and Amgen.

For me, the most important question in a phase-II trial is: "What happened in the phase-I trial?"  If there was a phase-I trial.  For this treatment, there was and it included a placebo group.  The results were good, but not great, from the point of view of curing type-1 diabetes.  Over the years of the trial, the placebo group had lower C-peptide levels (meaning they lost the ability to make their own insulin). This is what would be expected during the years after diagnosis.  The treated group's C-peptide levels stayed about the same.

Obviously, an optimist will look at those results, and say "they stopped the loss, this is good, and the earlier we can use this, the better it will be".  A pessimist would say "they had type-1 when the trial started; they had it when it was over; there was no real improvement".

My blog on their previous results is here:
http://cureresearch4type1diabetes.blogspot.com/2014/07/ada-2014-type-1-diabetes-cure-research_14.html

And here is the most important graph from those results, you can see that treated people stayed the same (dark line at top) while untreated people got worse (lighter line below): 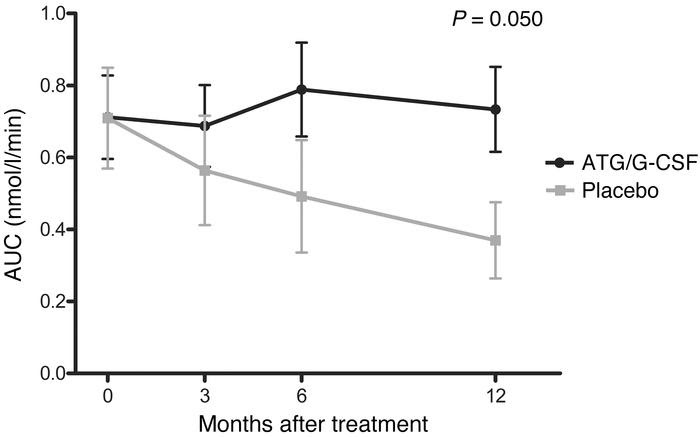 The full paper is here: http://www.jci.org/articles/view/78492.
Thanks to the The Journal of Clinical Investigation for making the whole paper available on line.

Joshua Levy
http://cureresearch4type1diabetes.blogspot.com
publicjoshualevy at gmail dot com
All the views expressed here are those of Joshua Levy, and nothing here is official JDRF or JDCA news, views, policies or opinions. My daughter has type-1 diabetes and participates in clinical trials, which might be discussed here. My blog contains a more complete non-conflict of interest statement. Thanks to everyone who helps with the blog.
Posted by Joshua Levy 3 comments:

Kickstarter is a web site which "crowdsources" funding for creative projects. This is called "crowdfunding". In my opinion is is an important part of a creative explosion made possible by the world wide web. If someone wants to write a book, they can run a Kickstarter to fund printing it, before they spend the time writing it. They could promise people who give $20 a copy of the book, and promise people who give $40 an autographed copy of the book, and allow people who give $200 to name a minor character in the book. That sort of thing. It opens up whole new areas of creativity, by lowering the financial risk to creative people.

You can go to kickstarter.com and search for "diabetes" to see projects which have something to do with diabetes.  Kickstarter is not the only site that does this kind of crowdfunding.  Gofundme.com and indiegogo.com are similar.

This blog entry is about The Diabetes Research Connection: https://www.thediabetesresearchconnection.org/

This web site is trying to take the ideas which worked so well for Kickstarter, and apply them to funding of type-1 diabetes research projects.  They've got six projects on their web site right now, so you can see how it works.  Of the six projects, one is fully funded, and one other is a sort of "internal project" to fund the web site itself.  The other projects are in process.  Projects must be completed in a year, and are limited to $60,000, so I doubt these guys are going to fund any human trials. However, all research needs to start somewhere.

There is no doubt in my mind, that the reason some people don't like giving money to large, impersonal organizations (like JDRF) is that they don't have any connection to where the money ends up.  If I give $1000 to JDRF, they end up giving that money to 300 different research projects.  I can read about the highlights of JDRF funding in general, but I don't feel a personal connection to any of it.  That really bothers some people.  (I'm just using JDRF as an example here, most large charities work this way.  Discussion of "earmarking" is below.)

This system is very much the opposite.  I know exactly where my $1000 goes, and get updates from the researcher, and see exactly what gets published and so on.  When I donate, I automatically become part of a community of people who care about that specific research project; there is a social aspect to it.

I certainly am not going to argue that one system is better than another; for one thing, I think different people will be attracted to different systems.  I like the idea of different models of charitable giving completing with each other to see which works best, and also available for different people who like different ways of donating money.

But it is also important to remember the risks.   The Diabetes Research Connection has not yet been reviewed by CharityNavigator.org, and doesn't have a track record to evaluate (either from a research point of view or a financial point of view).   Finally, the whole idea of pushing funding decisions down to the individual contributor has some large risks.  Charity organizations, especially the larger well established ones, have resources and processes to evaluate research proposals. Individual contributors rarely do.

I want to thank Brian Braxton for first bringing this to my attention.

Joshua Levy
http://cureresearch4type1diabetes.blogspot.com
publicjoshualevy at gmail dot com
All the views expressed here are those of Joshua Levy, and nothing here is official JDRF or JDCA news, views, policies or opinions. My daughter has type-1 diabetes and participates in clinical trials, which might be discussed here. My blog contains a more complete non-conflict of interest statement. Thanks to everyone who helps with the blog.
Posted by Joshua Levy 2 comments: