Results from a Phase-II ATG and GCSF Combination Trial


I'm embarrassed about this blog posting, because it is very late.  It reports on news announced about 18 months ago.  I was digging through some old emails, and found it.

ATG is Anti-Thymocyte Globulin, a biological agent used to lower immune reactions.
GCSF is Granulocyte Colony-Stimulating Factor, a biological agent which causes bone marrow to generate more stem cells and more immune cells, and put them into the blood stream.

So the two of them together could make an effective combination therapy against type-1 diabetes. ATG would lower the autoimmune attack, and GCSF would help the body regrow beta cells. At least, that is the hope. I wrote about the start of this trial here, and it contains a lot of background material:
https://cureresearch4type1diabetes.blogspot.com/2010/08/atg-gcsf-starts-phase-i-clinical-trial.html


In brief: this study took 25 people, 2/3s got the treatment, and 1/3 got a placebo.  The treatment was spread out over 12 weeks.  The primary result was C-peptide results after 1 year, but this paper reported on extended results after 2 years.

Results from a Phase-II ATG and GCSF Combination Trial

The following graph is from the paper, and you can see that for the first year the treated group did noticeably better.  (Meaning they generated the same C-peptide at the end as at the beginning, while the placebo group dropped over time.)  The 3 to 6 month time period was particularly strong, with the treatment group generating more C-peptide while the control group generated less.  The first year change was statistically significant.  However, during the second year, C-peptide numbers continued to drop for both the treated and placebo groups, and the separation between the two of them shrunk, so that the difference was not statistically significant. 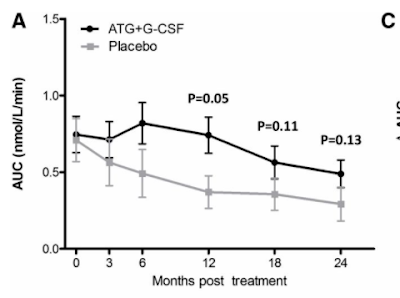 This is one of several studies which preserved beta cell function for a year during the honeymoon.  Early on, these studies gave me a lot of hope that they could be improved on, and eventually even lead to a cure.  However, so far I haven't seen any movement in that direction.  Treatments that preserved beta cells for one year, have (so far) not been extended to last longer.

Earlier results from this trial were strong enough so that this team started a follow on trial for honeymoon type-1s (people in their first 4 months after diagnosis):
Recruiting Site: http://www.diabetestrialnet.org/ATG-GCSF/index.htm
Clinical Trial Record: https://clinicaltrials.gov/ct2/show/NCT02215200

There are two obvious questions in this research:
1. If this treatment were started prior to diagnosis (in people who had several autoantibodies, for example, but were not showing any symptoms of type-1 diabetes), would it prevent the onset of symptoms?
2. If this treatment were repeated on a yearly, or every two year basis, could it prevent type-1 diabetes completely?  And would the hassle and side effects of the retreating on a regular basis be worth it?

Unfortunately, the new study (in honeymooners) will not answer these questions.  But it is three times as large, so it will confirm that this study was not a fluke, and the results should be available very soon.  Recruiting was completed before July 2016, so primary data should have been collected by July 2017, and publication should be imminent.

Since this study started, there is now a new hope for this level of result ("preserving beta cells for one year").  Those results could be applied to presymptomatics: people who had two or more autoantibodies, but no symptoms of type-1.  Preserving beta cells for these people would have the effect of delaying the diagnosis of type-1 diabetes.  That would be great.  However, identifying presymptomatics to test this on has just happened in the last few years, and few studies have looked into this.  But I will be looking forward to seeing the results of these studies (as prevention).

Joshua Levy
http://cureresearch4type1diabetes.blogspot.com
publicjoshualevy at gmail dot com
All the views expressed here are those of Joshua Levy, and nothing here is official JDRF or JDCA news, views, policies or opinions. My daughter has type-1 diabetes and participates in clinical trials, which might be discussed here. My blog contains a more complete non-conflict of interest statement. Thanks to everyone who helps with the blog.
Posted by Joshua Levy 1 comment: