Back in 2011, when this clinical trial was registered, I was not careful about blogging on all the new research.  Somehow I completely missed this study. So this is my first blog posting on this research.

This trial was testing the impact of giving two different stem cell treatments at the same time.   The people in this trial had long established type-1 diabetes.   No long term immunosuppression was used. The study was randomized and controlled, but was not blinded. The researchers and the patients both knew who was getting the treatment and who was not.  A total of 21 people were treated and they were compared to 21 people not treated.  This paper reports on data gathered for a year after treatment.

The people were all adults, and had been diagnosed (on average) for 7 to 10 years.  Everyone had type-1 diabetes for at least 2 years when the trial started.  The clinical trial record describes it as phase-I / II, but the paper calls it a "pilot trial".  Based on size I'm calling it a phase-I trial.  But it's large for a phase-I trial.

The treated people were given two types of stem cells:
The Results

The following two graphs include the most important results, from my point of view.  The F graph shows fasting c-peptide levels. The A graph shows c-peptide levels 3 hours after a meal.  In both cases, higher numbers are better.  C-peptide is generated when the body produces it's own insulin, so these graphs show the body generating about twice as much insulin in two different situations. 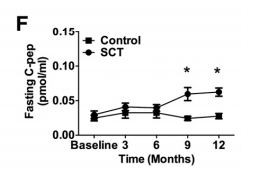 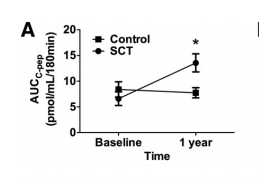 In addition, they measured A1c and insulin usage, plus some psychological measurements of happiness and number of low BG instances.

The treated group's insulin usage dropped about 30% (while their A1c levels dropped also!).   You could argue that these researchers are 30% of the way to a cure, although that does oversimplify things.  Again, an oversimplified comparison to other clinical trials done on long established type-1 diabetics:
All of this is good news, and similar to Stem Cell Educator results, which (up until now) have been the absolute best results seen in long established type-1 diabetics.


Joshua Levy
http://cureresearch4type1diabetes.blogspot.com
publicjoshualevy at gmail dot com
All the views expressed here are those of Joshua Levy, and nothing here is official JDRF or JDCA news, views, policies or opinions. My daughter has type-1 diabetes and participates in clinical trials, which might be discussed here. My blog contains a more complete non-conflict of interest statement. Thanks to everyone who helps with the blog.
Posted by Joshua Levy 1 comment:


Alefacept is a drug that has been used to treat the skin condition, psoriasis. Psoriasis is generally considered to be an autoimmune disease, similar to type-1 diabetes, but with the body attacking it's own skin cells, rather than it's own beta cells. So trying a drug already approved for Psoriasis on type-1 diabetes seemed like a reasonable thing to do, and these researchers did it. You can read my previous blogging here:
http://cureresearch4type1diabetes.blogspot.com/search/label/Alefacept

This was a honeymoon trial. 33 people got the drug and were compared to 16 who did not. The treated group got a dose a week for 12 weeks, then a 12 week break, and then weekly doses for 12 more weeks.  This publication is the two year follow up; they have already published a one year follow up.  The graphs below summarize the main findings.

For me the "A" and "C" graphs are the important ones.  The "A" graph (upper left) shows that untreated people's C-peptide levels did not drop in the first year, and even in the second year,they dropped less than the placebo group.  Remember that generation of C-peptide measures how much insulin the body is naturally producing, so more is better.  The "C" graph (lower left) shows that untreated people used about 30% more insulin after two years, which is also a good result, especially when graph B shows that both groups had the same A1c numbers.

Cure Results
My reaction to this is the same "boilerplate" reaction that I've had recently to other honeymoon research where the untreated group got worse, and and the treated group held steady, so at the end of the study, there was a statistically significant difference between the two:

I think I was much more excited about them in the past.  Part of my lack of excitement now is that the treatments with these results that I saw a few years ago have not progressed. They don't give better results in more recent studies.  That might be because the research is taking longer than expected, or it might be that getting a small result is much easier than getting a useful (to patients) result.  But in any case: I haven't seen forward progress in other treatments with similar initial results, so I've become less excited about these kinds of results, in general.

So in general, these results go in my "good start, but more is needed" category of results.
I like them; I think they represent potential, but I'm not excited by them.

Treatment Results
If you look at chart D above you can see that the people who took Alefacept had half as many low blood glucose events, as those who were not treated, and this was statistically significant.  From a treatment point of view, this is an interesting finding.

Not Moving Forward
Unfortunately, in a certain sense, none of this matters.  The company that made Alefacept stopped production in 2011, so it has not been available for years.  I don't know of any planned clinical trials with Alefacept, nor any similar fusion proteins.

COMPare is an experimental methodology for reporting switched or misreported results.  As my own experiment, I'm going to report on COMPare metrics for all results that I blog about in 2016.  I will explain this methodology in a blog posting in a week or two.  So the text in green should make sense then.  For now: this study has a very good COMPare score.


Joshua Levy
http://cureresearch4type1diabetes.blogspot.com
publicjoshualevy at gmail dot com
All the views expressed here are those of Joshua Levy, and nothing here is official JDRF or JDCA news, views, policies or opinions. My daughter has type-1 diabetes and participates in clinical trials, which might be discussed here. My blog contains a more complete non-conflict of interest statement. Thanks to everyone who helps with the blog.
Posted by Joshua Levy 1 comment: